Bosch’s T4B (amazon.com link) ‘Gravity-Rise’ Miter Saw Stand is built to be a workhorse. It has a very wide base which adds to stability and the whole thing weighs in at 76 lbs. You can expect this stand to last you quite awhile despite consistent usage, though I am confused by the manufacturer’s 1 Year Warranty. It took me about 40 min to assemble but it is all tightening bolts and the directions are very well done. Once it is ready to go though, this piece of equipment takes a lot of the effort out of using your miter saw and allows you to enjoy what you are doing.

This wheeled stand has two different modes, one for moving and one for making cuts which are quite easy to switch between even with one of my saws attached. It was a great idea for Bosch to add their ‘Grativity-Rise’ engineering to a miter saw stand. An explanation of how it works will not do proper justice to the way it marvels in action. Its real function is to let you lift the stand into the vertical (mobile) position without feeling the weight of the system. It also stores with a pretty small footprint in the vertical position.

One of main strengths of this stand design is the ability to use the stand to move the saw about a jobsite with great ease. The wide base and 8-in pneumatic wheels let you push it over bumpy terrain fairly easily. And it can even setup for cuts on uneven ground with the two independent level adjusters. It can also go up and down stairs. For me, it really shines 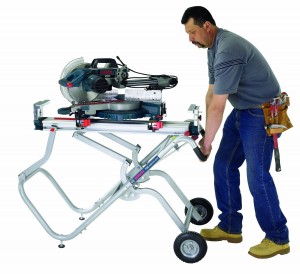 during inside remodeling jobs where I have to go between different locations within the house.

Bosch also did a good job making this stand easy to setup and break down. There are no tools required to adjust this thing whatsoever. From attaching and removing saws to adjusting anything and everything to do with the extensions, setup is a breeze.

You must remember that the thing is heavy though, so you will need a trailer of some kind to tote it around unless you have a helper for putting and taking out of your pickup. The main advantage of this stand is its ability to keep the saw attached wherever you are taking it.

Impact on Saw Use:

The T4B has a really nice material support system that is sturdy and even features material stops. The supports themselves run along two steel bars. Bosch lists full extension accurately at 103” and it allows you to support 18’ of material. The material stops flip in and out of the way quickly with little effort and they allow you to repeat cuts back to back to back without a hiccup. For any miter saw stand or table, this is my vote for most important feature. It really improves your speed and confidence.

I know this is a bragged about characteristic of this particular piece of equipment but to me, even when you have it in the vertical position the footprint is larger than other stationary saw stands that I have folded and hung on my wall. I know they say there is no issue but it also scares me a bit to have my miter saw stored on it in a vertical position. The base is wide even when the stand is vertical, but I also fear for it falling over so I have it tied to my wall just in case.

This model has been around quite a long time and it has continued to be popular so why change it? I can certainly see where Bosch is coming from with the lack of updates but with

that said, I think it is unacceptable for them to have discontinued making certain parts for it. It is difficult to find items like the tires and while mine has not encountered any issue yet, I have to watch out for scraps on the jobsite for fear of having to hunt down replacements.

Bosch knows they have a great product here. Maybe that is why they thought it was acceptable not to add some sort of padding for the steel tubing that rests on the ground when the system is in the vertical position. To me, this just seems like a cheap miss and they have had plenty of time to add padding. I ended up wrapping it thickly with electrical tape so that it won’t scratch and rust but I really don’t see why I should have had to do that for the price I paid.

On Bosch’s site they describe a ‘universal mount for use with all major brands’ but I have found that Hitachi saws take some drilling to attach. Maybe in the future, Bosch could be more specific about which saws will and will not fit. It hasn’t hurt me so much because I have a selection of saws, but for the DIYer with one Hitachi miter saw, this could really be frustrating. To be fair, it will accept a wide range of saws without adjustment which does better than many bracketing systems out there.

For an old man like me, the T4B is the premiere wheeled miter saw stand on the market based on the momentum of ‘Gravity-Rise’ alone. It is extremely helpful moving around my shop and home and because of that I would recommend it to single contractors who do finishing work or other small projects. It could even have use to professional crews that have one saw they want to mount consistently or a variety that they need to switch between. It is one of the only wheeled stands out there that really could have use for such a crew, as long as the 1 year warranty isn’t an issue for you. You can also go to Amazon.com and check their price on the T4B to see if it fits your budget.