Dewalt is a brand you can usually trust to make long lasting items and the DWX723 Heavy Duty Miter Saw Stand (Amazon.com link) is no exception. This thing is 35 solid pounds but that almost seems light once you analyze the size and build. You can tell that the legs, the extensions, and of course the work surface itself present no danger of fragility at all. The only parts that aren’t going to stick around forever are the few plastic pieces Dewalt chose to use. Actually, I’ve only had mine for about a month and I can tell that one of the leg locks is going to break sooner rather than later. And as soon as I got it out of the box I decided it would be smarter if I broke off the plastic wing nuts that hold the support on the extension arm as well as those that are there to raise and lower the support, and replaced all of them with real washers and lock nuts to be sure everything stays together

This sawhorse style stand is as sturdy are any other one you might buy. The table extensions lock into place solidly wherever you need them and remain as level as you could hope for when completely extended, which is quite impressive considering they enlarge the table by so much (I can get away with not using any extra rigging to cut 20’ers). The manufacturer actually brags that the 723 can support 500 lbs of material. I don’t weigh my lumber out before I cut it but I sure haven’t had any fears for the thing collapsing when I’ve taken it through its paces. This is stand has strength enough for a real framing crew.

Let’s be honest here: this is a big saw stand without wheels. Some would definitely find that this stand is better for them to keep in one set location. But 35 lbs sure isn’t much when you compare its weight to the larger 12’ miter saws out there and the fact that it folds up makes it much easier to keep balanced when carrying. Even when it has been folded up though, it 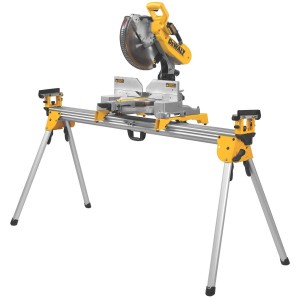 is still 5’ long which can obviously fit into a truck or trailer but not into the backseat or trunk of my compact car. They did include a handle on the underside for carrying without which it would be a struggle for some to move this stand around.

Once you have it where you need it to be though, this thing sets up quickly and easily. The legs lock into place ‘like that’ and it is easy to adjust the arms to the lengths you need. After the first two or three times, it is really easy to mount and then remove your saw from it. Remember that the saw does actually come with the DW231 mounting brackets and extension stops; apparently many people have been misled by pictures and recommended buys into buying an extra set but I research all expensive tools quite a bit and luckily I picked up that little piece of information.

Firstly, when talking about versatility, it is important to note that this stand has one of the greatest ranges for material support when fully extended. It is solid enough to be a stationary workbench but light and compact enough that you can take it out on the jobsite or into someone’s kitchen you’re remodeling. Between its strength and ease of use, this stand is suited for all different carpentry needs – and I’m not the only one who thinks so.

For me, another big part of a tool’s versatility is how well it cooperates with other tools and I have to give the DWX723 pretty good marks. While the company recommends using a ¾” plywood base between the brackets and saw for other brands of miter saws, I have noticed that it isn’t with all of the other brands. Some of my non-Dewalt saws are actually the right size to clip right in right away.

The only real extra this saw has are the work stops on the supports but they are about the best feature you could ask for on a miter saw stand. A very simple mechanism allows a positive stop to flip up (and back out of the way again) which makes it easy to repeat cuts. Honestly though, they could have made them a little bigger-maybe an inch taller and two wider. This would help with stability on thin or extra long boards. I myself, just attached a few scraps to provide me with what I needed, but you do have the option of purchasing the larger ones that Dewalt makes if you would rather go that route.

You’d expect that such an expensive work stand would have it all, but it seems that Dewalt focused mostly on durability in their design. This is actually my personal preference but 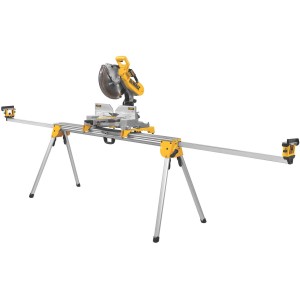 there are a few things it seems they could have included for the price. First, I’d say they could make wheel attachments for the bottoms of the legs, and if not that, they could at least have made the legs independently adjustable for working on uneven ground. I imagine that for the carpenter who is 5’10” to 6’2”, it is perfect height but I am 5’6” and it would have been nice for them to include adjustable legs taller and shorter guys also. Admittedly, the leg construction they decided on adds to the stability of the saw (on even ground).
I also have a strong opinion that they should have included the larger stops on the original instead of having them as an extra purchase. Multiple saw placement positions along the 6’ work surface would have been nice too. And I also think it would still be profitable at the same price if they would have replaced all the plastic parts with metal ones. These are mainly nitpicky little things that don’t really devalue the saw being left off, so to speak, but they could have added value if included.

Honestly, this stand makes my life easier. I can tell it will hold up for quite a long time and it is really easy to use. While big framing crews don’t necessarily need these types of work benches, they could definitely get use out of it. DIYers, remodelers, and finishers could use this as well but there is actually a smaller version that would probably be sufficient for either of those groups, though it is the same price. Check out Amazon.com’s price on the DWX723 stand if you’re looking to buy it.