The Dewalt DWX724 (Amazon.com link) Compact Miter Saw Stand is a work bench with a real want-to-work attitude that is going to get tons of use for years to come. Made from lightweight aluminum it weighs ‘only’ 30 lbs which is 5 pounds less than its big brother the 723 but it features a significantly smaller footprint (43” as opposed to 60”). The manufacturer promises that it can support 500 lbs and I would believe it if they said more. The only real improvement they could have made in this category is the inclusion of too much plastic. I think all metal construction is a reasonable demand given the price.

This small stand does not rock or lean. I think the fact that legs are simple- no length adjustment or wheels- adds to its solidity. My saws clamp to the brackets quickly and 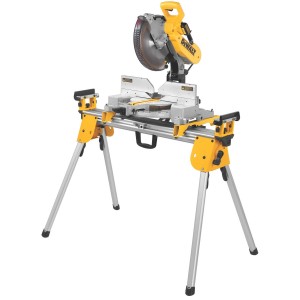 securely. There is a two button mechanism to remove them: cumbersome maybe the first two tries but then it’s simple and you appreciate how strong the bond is between your saw and workstation. Everyone needs to know though, that the saw does come with the universal clamps (DW231) that aren’t pictured. I actually bought and extra set but it worked out because now that I have two sets of brackets, I can keep my most used miter saw clipped in to one set and use the other set as needed. So the extra brackets actually come in handy for me but for others, it would just be an annoying additional expense.

Fully extended, my work supports stay completely level. Impressive. Dewalt advertises that the 724 can support 10’ of material but you can squeeze out a few extra feet if you know what you are doing.

Let me just mention here, this thing takes no time to set up out of the box. It is almost ready to go. Once you have it ready it is very fast to adjust and set up. You can fasten a saw to it quickly and the simple levers make leg setup and extension adjustment quick and painless.

Much smaller than the 723, the compact version can fit into much tighter spaces. Folded up it is only 43” long, which can easily fit into any back seat. This is considered a stationary piece of equipment but it is light and small enough to move around within the same worksite. You can even hang it on your workshop wall! This is the reason main reason someone would take it over the 724.

Of course, it doesn’t have wheels or the option as an accessory so you won’t be able to keep your saw on it and move it, but for a non wheeled version, this work station is quite portable.

The only adjustment you need on this stand to use non-Dewalt miter saws is a ¾” piece of plywood between the clamps and the saw. At least that is what Dewalt says, in actuality some of my other brand saws fit right on it without a hitch.

Obviously, the mobility this one boasts increases one area of versatility but its limited extensions make it lose ground to its big brother in another area. It could have a few more features but it seems the two main focuses Dewalt had were durability and making this one compact, upon which they delivered marvelously. 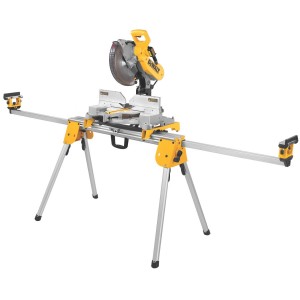 The positive stops on the table extensions are a really wonderful perk of this work station. They get out of the way quickly when you don’t need them and it is easy to adjust them to where you need. There are similar products with this feature and I think it was a great decision for them to include them on both models. They could have included the larger stops on the saw (because you have to try a little too hard to keep your thinner materials on them when extended far from you) but then they couldn’t sell them for a bit extra could they?

Another nice feature is the rubber feet which allow you to set up inside finished homes without damaging the floor. They are screwed into the bottom so you aren’t going to lose them when you’re in a hurry like the old model.

The first that stands out to me is the missing price reduction from the larger stand. I did choose this one anyway, but it clearly takes fewer raw materials to make this one than the other one so why would it not be cheaper? Dewalt, like all big American companies could afford to provide more or lose a little profit. It is annoying to me that they didn’t, for instance, use metal lock nuts throughout the design. The plastic ones are just going to break with consistent use. They also could have added wheel attachments and/or height adjustments to the legs.

This is a great addition to a DIYer’s workshop. It could also help out a single contractor would does different remodeling or finishing work. It is easy to setup and adjust, has decent portability and will clearly last a long time. Both the 723 and the 724 are great values, but which one will suit your uses best is the better choice for you. See Amazon.com’s price on this compact stand if you’re thinking of buying it.