Dewalt lists theirs as the DWX726 (amazon.com link) and it is pretty solid. This model is made mostly out of steal so don’t let any of the 67 lbs surprise you. It comes with a 3 year warranty so you know they made it to stick around awhile. One concern I have though, is that Dewalt makes other stands advertised as being able to handle a total load of 1000 lbs and this one is only listed with a 300 lb maximum load. It makes me wonder whether it will be able to hold up to consistent stress. I’ve had mine for awhile but I guess I still have 2 and a half more years to put it through its paces before I have to pay or do my own repair work. If I had to guess, it will be the support arms that go first because they already sag under different weights and both arms slide into the same tube. The design is still working but I fear that with age it may get harder to work them to the necessary positions.

Keep in mind that this is a rolling stand so it will not be quite as solid as one with 4 simple legs, but it does hold the saw itself very sturdily. It actually holds it like it doesn’t want to let go. What I mean by this is it takes a good 15 min to attach and remove your saw. Regarding the work extensions, I’ve already mentioned that they sag with different weights but I would like to add that they do not stay level as you extend them out either. Dewalt really should have included some sort of support on the end that drops all the way to the ground so you didn’t have to move your materials about so daintily. Or they could have used extensions like the ones on the DWX723 and 724 because they are much more solid.

Portability is obviously the main focus of the design, but it is not just portability for the stand itself, because you can leave the saw attached and move it all the way to upright position. In order to do this, all you have to do is release a break and push down on the handle so that 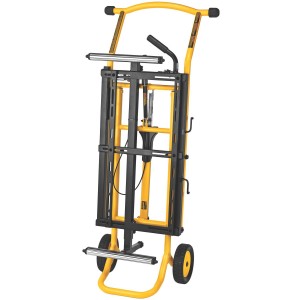 the saw mount lowers to stow position (it actually needs the saw’s weight to aid with this). To begin using the saw you release the brake again and pull up on the handle (with compression assistance so you don’t have to muscle it up). I should note here that you must wrap the cord up after you change the position or it gets pinched. It is pretty stable in the upright position even with a saw on but I attach mine to the wall with string just in case.

The wheels are nice and oversized so you can go over grass or a clay jobsite. The originals were plastic though, so I upgraded mine to pneumatic one after about 2 weeks. As heavy as it is though, you can’t get it into a truck bed very easily by yourself and it is best if you have a trailer if you need to drive it somewhere. To me, this is for a DIYer who needs to wheel it around his home.

The only really versatile aspect of this saw is its compatibility with any miter saw you would like to put on it. This is currently Dewalt’s only wheeled design and that I guess gives it a leg up on other Dewalt stands but it is probably not the best design out there for wheeled stands.

In my opinion, Dewalt would have a higher quality product if they would have gone with positive board stops instead of the rollers. The rollers do make it easier for one man to handle 2’x6’s and the like but the setup already struggles with increased weight so I’m confused as to why they exchanged these for the stops. The rollers do adjust quite high so you can use the bottoms of them as less accurate stops if it helps any. High quality stops let you make the same cut back to back to back with a single measure.

First and foremost, the instructions for assembly are absolutely horrible. I knew this going in, but just so you know, it was a rumor founded in truth. You really need to take your time and have patience or you will end up with pieces left over. The handle is everyone’s most listed frustration but luckily I had read somewhere to put the smaller bolt in first and that made it work for me too.

The once mentioned support system to keep the extensions solid is another glaring weakness. They could have vastly improved the utility of the stand right there. And it seems to me, with the design they could have given you two extra wheels or at least provided them as an accessory. Truthfully, I think the main missing component is effort on Dewalt’s part.

I honestly believe that the best use for this stand is for an older DIYer who needs to move their miter saw around their workshop and home. But in truth, there are better attempts at the same concept by other brands as well as better stands by Dewalt. It really is a nice idea but the execution was too poor for it to compete with more expensive versions. The concept alone though makes it suitable for the needs of some, and if you believe that is you – make sure to check out Amazon.com’s price on this stand.